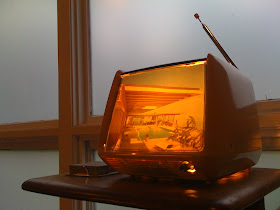 Things got a little crafty over at Atomic Indy headquarters this past weekend. It went a little something like this...

Per usual we were cruising the residential side streets in search of Mid Century Modern treasure when we happened upon this sight:

What really caught our eye was a big "free" sign. Grabbed a few things, then announced the remaining curbside freebees to the Atomic Indy Facebook fans.

Was intrigued by a 1972 Sony TV-750 with its space-age look and clean lines. Especially after cleaning 38 years of grime from it.

It didn't work. Expected that. For giggles, took it apart. 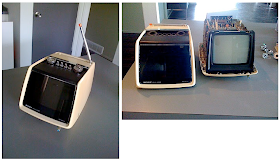 Then suddenly, epiphany delivered a face-smack.

Grabbed the socket and power cord (with an inline switch) off a couple old light fixtures. Then got to work. 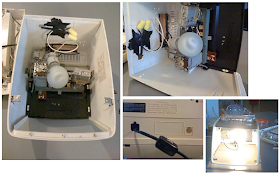 We used a low wattage CFL bulb to make sure we didn't have any heat issues. The guts of the TV will be dropped off at a local e-scrapper.

Atomic Indy is not responsible for you burning your Mid Century Modern house down, or any electric shocks that may result from you attempting to replicate this.

The legal gods have been appeased. Onward.

Here's where the cool begins. We carefully selected our favorite Julius Shulman images. Settled on one. Meticulously sized and cut it to fit the inside of the glare screen. 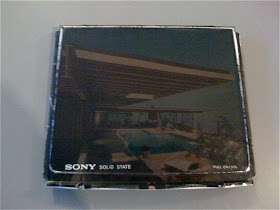 Put it all together and you've got a really sweet back-lit picture frame to display your favorite Mid Century Modern images. Also makes a great kitchy-cool accent lamp. 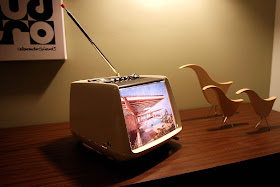 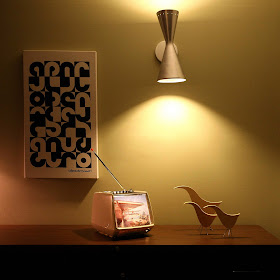 I imagine we'll change the image out every so often. A process that will take about 15 minutes each time. 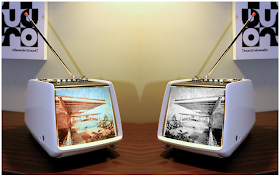 You can check more pics on our Flickr set.